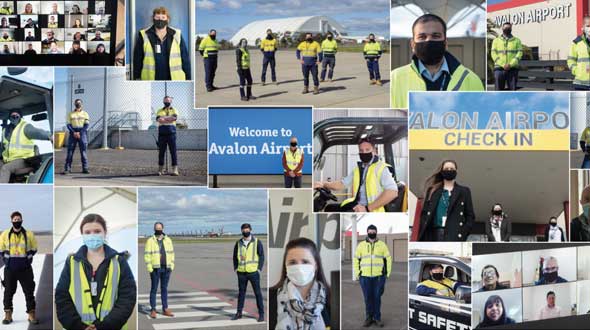 Avalon Airport is thrilled to take out the Safe & Healthy Business Award in the prestigious 2021 Geelong Business Excellence Awards.

The awards ceremony was delivered online for the second year running due to Covid-19 restrictions, and a small number of the team gathered in the Avalon Airport cafe to celebrate being shortlisted for four awards: Medium to Large Business (sponsor: EML); Innovation, Research and Development (sponsor: VIVA Energy Australia); Corporate Social Responsibility (sponsor: genU) and Safe & Healthy Business (sponsor: WorkSafe). The team was thrilled to win the WorkSafe sponsored Safe & Healthy Business Award. The airport has always made safety a priority, and completed major upgrades across 2020 that furthered their commitment to creating a safe and healthy space for staff and passengers.

During the 2020 lockdowns Avalon Management also prioritised the protection of jobs as much as possible, creating pathways for staff to learn and take on new roles or to work for other companies.

The awards period, which ended in May this year, covered a very difficult period in the airport’s history. Covid-19 had stopped flights in their tracks mere weeks after the launch of Citilink flights to Bali last year. Twice daily AirAsia flights to Kuala Lumpur as well as domestic Jetstar flights were all performing strongly before the pandemic disrupted the world. As borders between countries and states shut down one by one, the airport was left with some truly challenging decisions to make.

Avalon backed itself, choosing to continue with planned upgrades to the check in and domestic security areas, installing state of the art check in kiosks, auto bag drops and CT scanner. The technology was designed to create a more seamless journey through the airport for passengers, as well as increased safety. The airport also opened its taxiways and aprons to Qantas, Jetstar and Virgin, parking around forty aircraft and housing large
engineering teams.

Avalon also planned and developed a new nursery, which now boasts 2,600 young trees, that will eventually be dispersed around the airport’s entry and exit roads. In the future the airport hopes to use the nursery as an outdoor wellness area for staff and to wholesale plants.

The airport prides itself on its comprehensive program of training in areas as diverse as IT best practice to drug and alcohol awareness to aircraft refuelling.

Avalon Airport has made significant contributions to the community through sponsorships of local sporting clubs, and the CEO Justin Giddings is an Active Geelong ambassador and a Community Hero for Barwon Health in its initiative to encourage Covid-19 vaccinations. Justin Giddings said, “It’s been probably the toughest year you could ever go through being an airport, and to have an award recognising that you’ve done your best for your staff is just fantastic.”

The team at Avalon Airport would like to express their gratitude to the Geelong Chamber of Commerce and to WorkSafe.