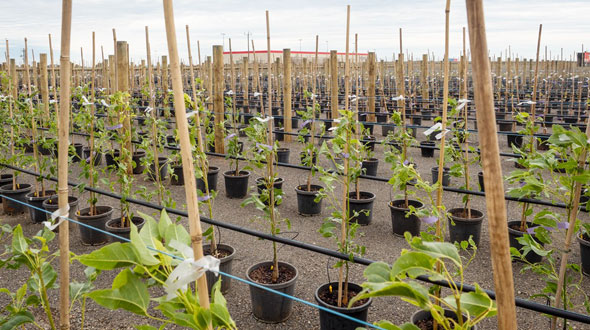 Much has been made of the new check in space and processes that Avalon Airport has been innovating and upgrading across the Covid-19 period. New technology such as touchless kiosks, new auto bag drops and a state of the art CT scanner have been installed, creating a larger, safer space and a simpler, more seamless passenger experience.

What’s less known is that the airport has also been using the time to plan and now implement a new nursery in order to address both aesthetic and environmental needs.

The extensive airport entry and exit roads require trees. As well as beautification, lining the roads with trees provides a wind buffer for passengers, protects against soil erosion, and creates a clear way-finding system.

Installing fully grown trees can be a risky and costly exercise, particularly if the trees don’t take once they’ve been planted.

Saplings are of course far cheaper than full grown trees, an important consideration when requiring over 2,000 of them.

They are also more likely to thrive if established within their final environment, becoming accustomed to the exposure instead of being shocked by it if imported fully grown.

And if one or more of the trees doesn’t survive as a young plant then replacement is more cost effective.

Avalon Airport CEO Justin Giddings says, “We’re pleased to be establishing such a large area for Avalon Airport Nursery. We have a history of planting trees onsite, having planted around 200,000 in and around the airport since 2000 as part of Avalon Landcare. It’s great to be doing so again in such a prominent spot with the purpose of using the trees. We can’t wait for them to develop and be replanted in their final positions around the airport.”

Avalon Airport Nursery covers some 4,500sqm and contains around 2,600 plants. The bare rooted pot stock is a mix of native and international trees that thrive in the climate, and includes wattles, kurrajong trees, tea trees and banksias as well as the brilliant maidenhair and the beloved blue jacaranda.

Once the trees are more established the airport plans to convert space in the vicinity into a staff garden and picnic area, and eventually hopes to wholesale.