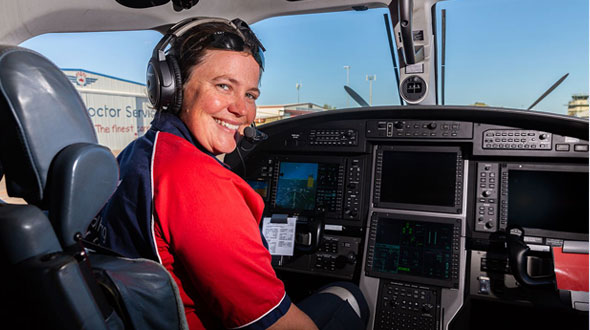 The RFDS was awarded a Special Commendation at the 2022 SA Health Supplier Awards (Innovation Category) for the integration of a groundbreaking portable flight simulator into its operations.

The FlightSafety International ‘MissionFit’ simulator, which was introduced to the RFDS Adelaide Base at the start of 2022, is specially configured to simulate the RFDS Pilatus PC-12, of which there are 19 in the aeromedical fleet in SA and NT.

The simulator enables pilots to navigate normal and abnormal scenarios and adverse weather conditions, while completing all of the necessary checks and procedures in a real flight.

RFDS Central Operations Head of Training and Checking, Matthew Cosier, said the MissionFit simulator is a new type of technology that will benefit the training of both new and experienced PC-12 pilots.

“When commercial pilots join the Flying Doctor, they need to have a minimum of 2,500 flying hours with experience flying in rural and remote Australia – but generally they never flown a PC-12 aircraft,” he said.

“Firstly, we have to put them through Ground School and then weeks of rigorous training with a pilot instructor before they’re signed off to fly on their own.

“The MissionFit will allow us to train pilots to a new level of standard, in particular handling the system failures that we can’t simulate when we’re flying in the real aircraft.

With emergency retrievals required day and night, pilots must be adept at handling all scenarios and weather conditions.”

She said the simulator puts pilots under pressure, making the recreation of emergencies as real as possible.

“Having the MissionFit makes the simulation as real as it possibly can be without any risk to the crew or the aircraft – we’ll be put through certain scenarios so that we can recognise and deal with them before they become an emergency,” Ms Ford said.

“Every decision we make is based on the experience we have. The more situations you expose pilots to, the better the pilot is going to be.”

Each year, the Flying Doctor airlifts more than 9,000 pa­tients in the SA and NT – equivalent to 25 missions per day.

Having this interactive device relieves more aircraft from training duties, increasing the RFDS’s capacity to provide vital 24/7 aeromedical services to all corners of Central Australia.

Pilots can train at any time without worrying about aircraft availability, air traffic congestion or poor weather conditions from hindering their mandatory training.

“As an RFDS Pilot we have to successfully pass four checks a year. These checks range between two and three hours each – around half of which can be conducted in the MissionFit simulator,” Ms Ford said.

“By taking all the possible mandatory training we can out of a real aircraft and into the simulator, it means more of the RFDS fleet is available to continue to save lives.”

The purchase of the MissionFit simulator was partly funded by a generous Gift in Will made by the late Peter Griffiths Smith.

There are also the added economic and environmental benefits of the simulator – the financial savings made on fuel due to reduced actual flight time, as well as lower emissions and carbon footprint.

But at the end of the day, the biggest beneficiary will be those from rural and remote communities who turn to the Flying Doctor for help.

“The people who are going to benefit the most are patients of the RFDS,” Mr Cosier said.

“Our pilots will be able to deliver a new level of safety as we continue to support healthier and happier Australians no matter where they live, work or play.”

MissionFit is a CASA-approved flight simulation training device and in the future may be able to simulate the RFDS Medi-Jet 24.